In the mid-90s actor Leslie Nielsen was doing publicity for a comedic book “Bad Golf My Way.”  The radio stations who set up interviews with Nielsen expected the star of “Airplane” and  “Police Squad / The Naked Gun” to be as witty as the man who was in those movies. While Leslie Nielsen had a sense of humor he was not a funny man. The public seems to forget that writers write those funny lines for actors to say.

Nielsen did his best, doing four hours of back to back interviews with FM stations across the country. But the radio hosts mostly got a reality check. Just because you’re a comedic actor does not translate into being a funny guest.

On the other hand Bob Uecker was a professional baseball catcher for six seasons in the 1960s who had a career .200 batting average. While Uecker was by his own estimate not a particularly good ballplayer, he was very funny. Uecker parlayed his natural sense of humor into a fifty year career as a baseball announcer and talk show guest, and he is still going strong, The 87-year-old Uecker remains the radio voice of the Milwaukee Brewers.

Here is Uecker’s seventh appearance on The Tonight Show, September 23, 1971.

What makes this clip rare is that for the first 10 years that Carson hosted The Tonight Show from New York, almost every tape was subsequently erased. END_OF_DOCUMENT_TOKEN_TO_BE_REPLACED

She is there for every pitch – “Front Row Amy”

The Milwaukee Brewers are battling the Los Angeles Dodgers in the playoffs and the games are being nationally televised. This has led to a discovery for most (male) fans outside of Milwaukee.

You’d have to be completely oblivious not to notice there is a woman sitting in the first row behind home plate at the Brewers home games always wearing a low cut blouse.

You may think she is there to distract the opposing team’s pitcher. She is not. She has been going to Brewers games for over 10 years and her name is Amy Williams, aka “Front Row Amy.”

Amy is a die-hard fan. As a season ticket holder she attends around 50 games per year. In 2011 she moved to her signature front row seat and started getting “noticed.”

As she told OnMilwaukee.com in 2011, “What first got people’s attention was probably, well, you know, “the girls.” But, I think what keeps their attention is that fact that I am so passionate about the Brewers. Brewers fans appreciate the fact that I drive an hour and a half to games by myself, that I keep score, and that I really get into the game! The Brewers are my life during baseball season, and I guess that shows when I’m at games. I love them so much it hurts! And baseball is the greatest game on Earth!” How famous is Amy? Well she has a bobble-head available for purchase. I don’t know many fans who have received that honor. She also has imitators at Miller Park, such as this person, “Front Row Andy.” Getting to the ballpark END_OF_DOCUMENT_TOKEN_TO_BE_REPLACED

The Death Of The Scorecard At The Ballgame

Recently I went to a baseball game at that imitation ballpark in the Bronx they call Yankee Stadium. After being gently frisked at the admission gates and going through the turnstiles, the thing that did not greet me was what you see above: a vendor selling scorecards.

You could buy a scorecard, but not for 10 cents as it was at the Polo Grounds in 1949. The archaic idea of a scorecard costs $10 at Yankee Stadium and is available at the souvenir shops spread throughout Yankee Mall Stadium. The scorecard is buried in some glossy souvenir publication which I did not purchase, nor did anyone else.

When I used to attend a lot of games in the 1970’s and 80’s buying a scorecard was a no-brainer. From anywhere from a reasonable 25 cents in the early 1970’s to two dollars in the late 80’s, filling out that scorecard and having a program was a nice memento of a game I went to. There is a certain enjoyment derived from scorekeeping and having a permanent record of a game you are attending. 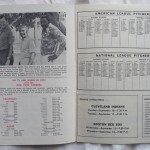 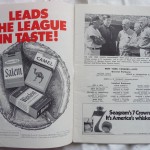 I just dug this program of my closet from a game I went to on Thursday evening September 6, 1973. The Yankees came back in the bottom of the eighth inning after trailing 6-5 on a three run home run from Mike Hegan to beat the Milwaukee Brewers 8-6. Bobby Murcer and Roy White also homered for the Yanks. The time of the game was 2:22.

In my childish way I merely recorded outs as fly outs, ground outs or line outs without denoting the fielders who made the play. As you can see my scorekeeping leaves a lot to be desired, but for a little kid I think I did a pretty good job. Eventually I learned to score correctly.

For 30 cents they packed a lot into 28 pages. END_OF_DOCUMENT_TOKEN_TO_BE_REPLACED